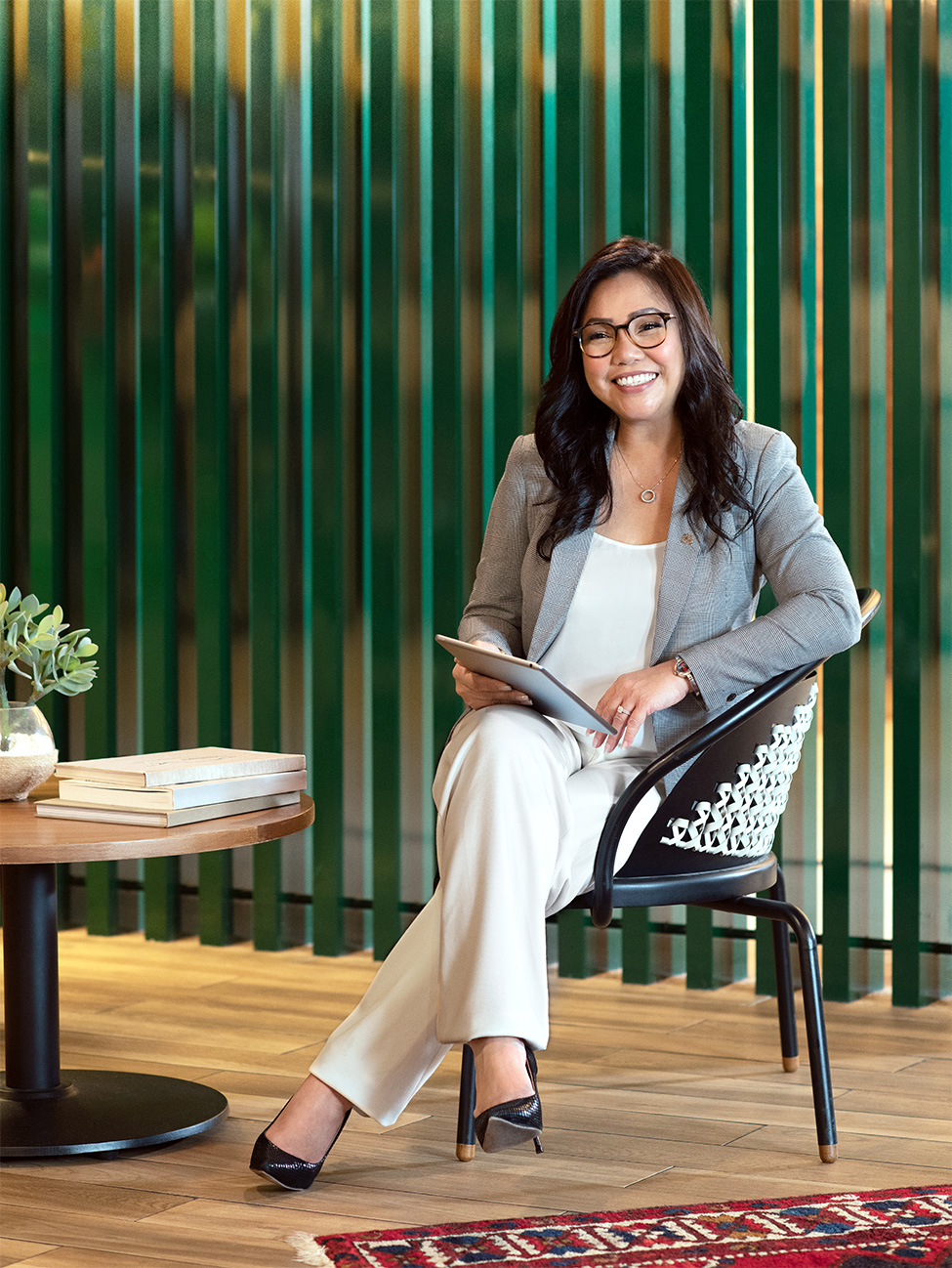 How long have you been in the industry? I’ve been in this industry for over 20 years. My first job was actually here in Singapore, with Royal Holiday Inn Crowne Plaza – that was what it was called then. My friend and I decided to apply after graduating, and I have never left since.

Then I moved to another hotel before moving to Canada where my sister lives, where I worked with a couple of hotels. I was a front office agent, then a front office manager, and then I decided to venture into revenue instead and focus more on that. That took me to the United States, and I finally moved back to Singapore about five years ago.

You work in an industry where making people happy is a big part. How does that make you feel about the Business of Happiness? It makes me feel alive, and I don’t really think of it as a job. Rather, it’s a lifelong commitment to drive and spread the happiness to my surroundings – both my colleagues and my guests.

What inspired you to join the industry in the first place? The idea of customer service was always in me. I wanted to be able to meet people from all walks of life, understanding their needs, their differences, and to communicate with them. And by being on the front line in the hotel industry, I was able to do that. It really motivated me to be able to engage with guests and create happy moments for them, whether it’s birthdays or wedding anniversaries – that’s what we all want to do in this industry.

What made you stay in the industry for over 20 years? Passion and commitment. Not only that, you’re meeting and talking to different people every day, and that makes my job pretty interesting. Not a lot of other jobs can let me do that. The best part of it is being able to meet a lot of celebrities.

Which celebrities have you met? I’ve met quite a few actually. I’ve met Bono, Cuba Gooding Jr – I was able to speak to him personally, because I had to ask him to move out of a room and I had to reassure him that his next room would be just as good. There was also Jackie Chan, Backstreet Boys, and NSYNC, to name a few.

And that’s the best part about working in the hotel industry – you never know whom you’re going to meet.

You said you started off as a front office agent. How did you eventually get into revenue? I didn’t know much about revenue back then because I was very much a people-person. I liked being able to interact and communicate with guests. But when I became a front office manager, I asked myself, “What can I do next?”

As a revenue manager, guests don’t really see what you do. But how do you think you impact a guest’s stay in a hotel? I have to understand that there isn’t a single price that fits all guests. Some people may be willing to pay a certain amount, while others will want to pay another. So I have to come up with an educated pricing strategy to be able to figure out what to sell, to whom we sell it, at what price point we’re selling it, and how to sell it.

So figuring out the right price points and strategic packages that allow guests to enjoy a memorable stay in the hotel – that’s how I feel like I’m able to contribute to their happiness. Ultimately, it’s still a team effort to make a guest’s stay memorable. From me setting the right price point, to the reservations department sorting out the bookings, to the front office checking them in, and to housekeeping making sure the rooms are beautiful – it’s a team effort. I suppose what I do just triggers that domino effect.

There’s a phrase that goes “Money can’t buy happiness”, but your job revolves around money. Being in the business of happiness, do you agree with that statement? I actually like to think of it this way: Money can’t really buy happiness, but if you set the right price points, it can surely make people happy. For example, if there’s a $99 deal that lets someone enjoy a staycation, I’m sure that will make that someone quite happy.

What’s your most memorable experience working in the Business of Happiness? Definitely the Y2K scare. I was a Front Office Manager in Canada at the time. We were anticipating all the ‘what-ifs’ 6 months before – what if the computers malfunction, what if the power shuts down at midnight. Obviously, there wasn’t much we could do until the day came. But we pre-planned everything that we could do should an emergency arise. We informed the guests of what to expect, we brought in extra manpower to work that night, we set up a ballroom with light refreshments – just to make sure the guests felt safe and secure.

Of course, Y2K came and went without any issue. But when I look back at it, those few hours I managed to spend with the guests were precious moments that I really appreciate.

Is there a particular moment you’re most proud of? Yes, it was in my second year in the hotel industry. I received a nomination for a Best Customer Service award. Unfortunately I was overseas during the event, so I couldn’t attend the ceremony. I was nominated by a guest who was staying at the hotel I was working at. Her child would go to school and usually a bus will ferry her to and from school.

But one day, the kid didn’t come back on the bus. I was almost done with my shift but I stayed to assist the nanny to locate the child. I called the school, I called the bus company, I called the parents to keep them updated on the situation. Finally, we found out that she was actually with one of her friends’ parents.

While I feel like I didn’t do much to find the child, the guest really appreciated my efforts and she got me a gift basket the next day. She even wrote in to thank me for what I did, and that’s how I got nominated for the award.

If you could offer a word of advice to someone who is considering joining the industry, what would it be? Believe in yourself. And have passion in what you do.