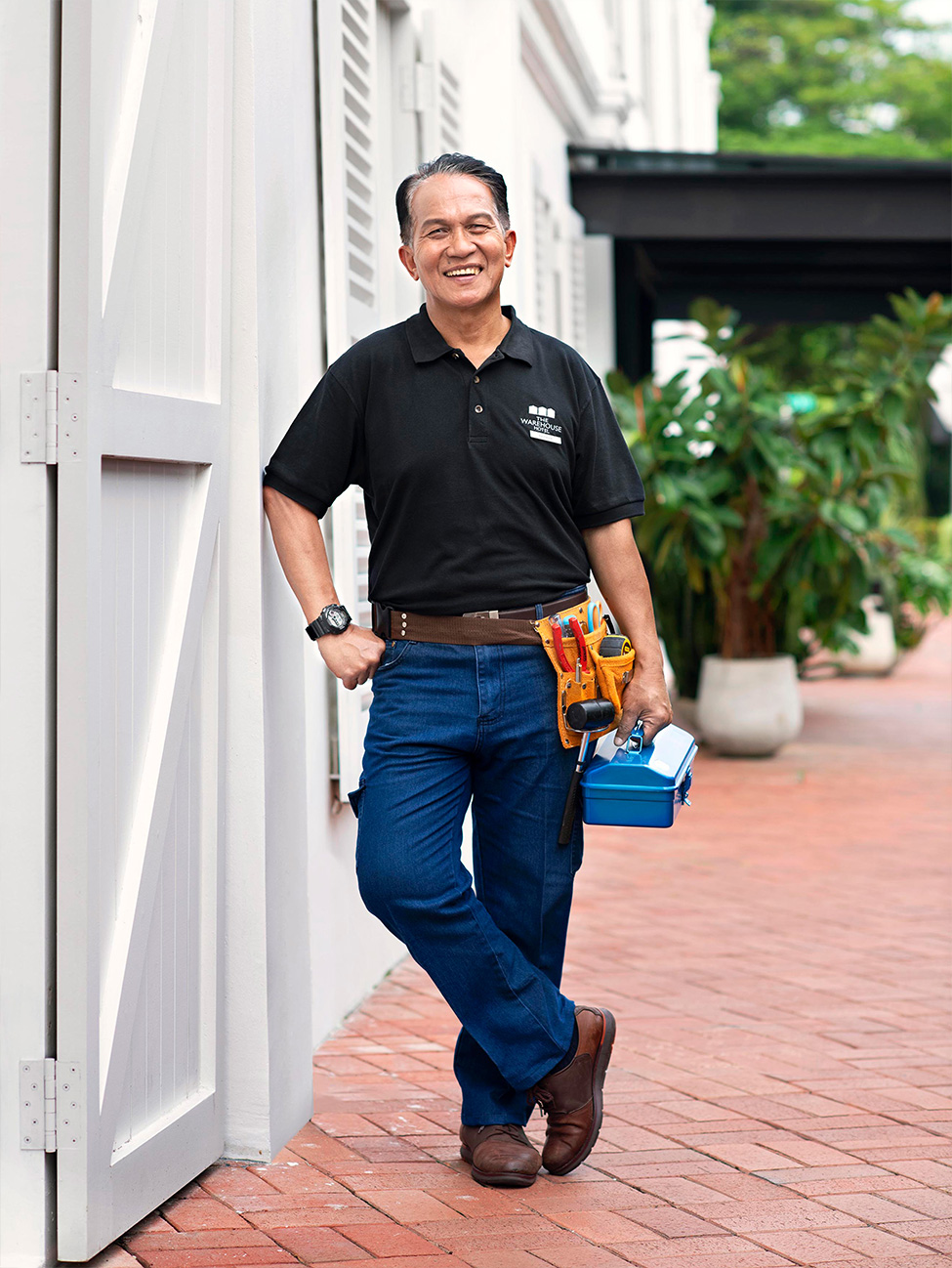 How long have you been in the hotel industry? I’ve been working in the industry for one year and four months. I was a retired public service officer – I used to work as a lecturer at ITE College West, teaching Mechanical and Electrical Engineering. To be honest, I was quite bored after retiring, just staying at home and being ‘bullied’ by my grandchildren. After five months, I told my wife that I was going to look for a job again. I thought it was an opportunity to put my skills to good use again and to prove my worth.

What made you interested in engineering? When I was a child, I liked working on hands-on projects. I used to live in the quarters at Alexandra Fire Station, and I grew up watching people doing all kinds of hands-on things like plumbing. I really enjoyed that and I told myself that I would do the same when I grew up.

My dad wanted me to become a fireman, actually. My older brothers joined uniformed groups but I chose to do something else. I don’t regret it because it’s something I am passionate about. Before becoming a lecturer, I worked at a few engineering-related positions in many different places. I was a rigger at an oil rig, and I’ve also worked with electronics in GEC, Phillips, and a few other companies.

How did you end up joining the hotel industry? I went to a job fair at Bedok Interchange, and saw that there was a position available as a Hotel Technician at a hotel. I popped in and had a brief chat with my current Operations Manager. He gave me a form to fill up and an email address to send my resume to, and told me to visit the hotel.

When I dropped by the hotel, I was quite happy with what I saw because it’s not that big compared to some places I’ve worked at before. I was more comfortable with a smaller space. My friend who works in the Maintenance Department in another hotel also recommended that I take up the job.

This hotel resembles a home, so it makes the work I do feel like housework – in a good way! I took up the job, because I’ve always helped around at home. When I was a lecturer, I also used to do community service for old folks living in Jalan Kukoh, carrying out some simple maintenance work in their homes.

Do you work alone or with a team? I am the only one doing maintenance work in this hotel, responsible for all 37 guest rooms and other areas which include the swimming pool, restaurant, lobby bar and a meeting room.

How do you do it all by yourself? It’s not easy. But I make it a point to share my knowledge with my colleagues – mostly the Lobby Ambassadors and Security Guards. They will follow me around and learn what I do so that when I’m not around, they’ll know how to get things done.

One thing I try to teach them is that you shouldn’t simply solve a problem by buying something new. Personally, I like to use my creativity wherever possible. I will source for materials from different places and re-use them to create a solution for any problems I find in the hotel. For example, I’ve used leftover pieces of wood to create clothes racks and door-stoppers which the staff here can use. I believe that there’s always a way to use your creativity to solve problems, or to create a better work environment.

Do you face any challenges being the only Hotel Technician? Yes, definitely. One particular challenge that comes to mind was when the hotel was going to turn the power off to commemorate Earth Hour 2017. On the day before the event, I had to attend to a family emergency at home. But because it’s a new hotel, and I’m the one who was most familiar with all the electrical switches, I wanted to come back to make sure that everything was in order.

Even though I had already run through the set-up with the electricians and contractors, I felt that it was my duty to make sure that the correct switches were turned off. I made sure to label all the switches, so the operations staff would know what to do. I actually felt more at ease knowing that everything was under control.

How would you compare working in a hotel with your past experiences working in other places? It’s a lot less stressful. And I get to make a lot of friends – with the contractors and suppliers. The staff here are very nice too, and the management is very down-to-earth. We joke around, just like a family.

Also, my current job is more hands-on, with much less paperwork. I used to have to do a lot of marking and report writing as a lecturer. But here, I just have to focus on keeping the place running and I get to apply my knowledge to real-life scenarios, which is what I really enjoy.

Having worked in a hotel for a while, have you learned anything new? Yes, I learn a lot by observing how the other staff members do their job. I’ve learnt how the housekeeping team cleans the rooms, and I even shared tips with my children. I like to observe how things are done when I’m making my rounds around the hotel.

What kind of advice would you give a mid-career switcher or a retiree who wants to join the hospitality industry? You have to be patient and willing to take on new challenges. It will be a new environment and there might be a lot of differences in how things are done compared to what you’re used to. But it's also an opportunity for you to gain new skills and grow your knowledge. So just go for it and give it your best.